​Murray Levick photos of the Antarctic 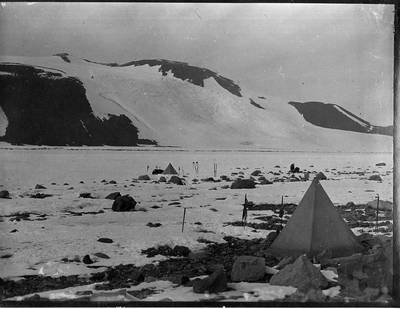 Click an image to view enlargement >>
The Keep was already familiar with the work of George Murray Levick (1876-1956) at Chailey Heritage, where he was for 30 years medical director of the Craft School for Crippled Children, founded by Dame Grace Kimmins. We were fortunate to purchase two groups of his papers illustrating episodes in his earlier life as a member of Sir Robert Scott’s ill-fated expedition to the South Pole,  and his naval service during the First World War. Scott appointed Levick as a surgeon and zoologist in 1910. He was not involved in the race to the South Pole, but was part of a group who spent two years (1910–12) exploring the coast of Victoria Land, spending the whole winter of 1911–12 living off seal and penguin in a snow cave at Evans Cove, an experience which remains an outstanding example of survival in the Antarctic. His photographs (opposite), added significantly to the value of the expedition’s scientific results. Levick served in the First World War in the Grand Fleet, the North Sea, and at Gallipoli where he was in the last party tohe was promoted surgeon-commander in 1915 and retired in 1917.  The archive includes letters to his future father-in-law, MaysonBeeton, 1914-1916, many of them expressing fury at the treatment ofthe wounded and critical of WinstonChurchill’s influence at the Admiralty.  The two lots cost £250 and £1300 respectively; half the cost of the latter was met by a grant by the Victoria and Albert Purchase GrantFund (ACC 12001 and ACC 12065’
<< Take me back